Heroes of the Storm news » Unranked Draft Mode and More! 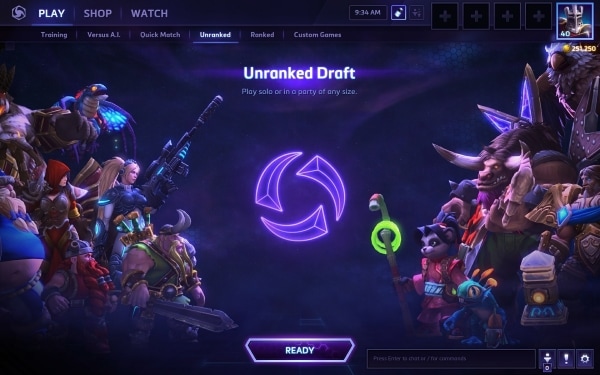 With this new game mode and the Ranked Play Revamp, we will also be implementing a couple of behind-the-scenes changes that should address some concerns regarding fair matches and immobility on the ladder.

Scary name, right? There’s no need to be scared, it’s actually a pretty simple concept. At the beginning of Season One, we will transfer all players’ current MMR into a cleaner, more accurate model for all game modes. We will be maintaining the current ordering, however, so you will still be matched with players of equal skill under this new system; we are simply adjusting our model to more accurately reflect the distribution of players. This means faster queue times at the high and low ends of the MMR spectrum, and more consistently fair games.

To make the matchmaking experience as smooth as possible with the introduction of new game modes and ranked systems in Season One, Unranked Draft Mode and Hero League will use a player’s Quick Match MMR as a guideline for players first entering these queues. Similarly, Team League will continue to use an average of all players’ Hero League MMRs as a guideline to determine how new teams will be matched. After Season One, the system will use Unranked Draft instead of Quick Match MMR as the guideline to determine a player’s initial Hero League matches.

Note: The Quick Match to Hero League seeding will not apply to players who are currently active in ranked play; in these cases, the system will use preseason Hero League MMR to determine their initial Season One matchmaking.

We touched on this briefly in the Ranked Revamp blog, but would like to reiterate what this change will mean for players at the beginning of Season One.

Uncertainty represents how confident our system is in knowing that you belong at your current rank or rating. When you first started playing Heroes, your uncertainty was very high, since the game had no notion of your skill level. Winning or losing games meant significant leaps in your rating until you reached a point where you started to level out. Playing more games at this point and maintaining a fairly average win rate would then give the system more confidence that you belong at your rank/rating and lower your uncertainty.

What are we changing?

Over the past several months we have heard complaints that many players feel “stuck” at their current rank or rating. In an effort to alleviate some of these concerns in ranked play, the uncertainty of all players will be significantly raised during the Hero and Team League placement matches at the start of each season, allowing significant adjustments to be made to your MMR as you journey into ranked play.

We hope you’re looking forward to the changes coming to Heroes of the Storm in our next major patch. We’ll see you all in the Nexus!