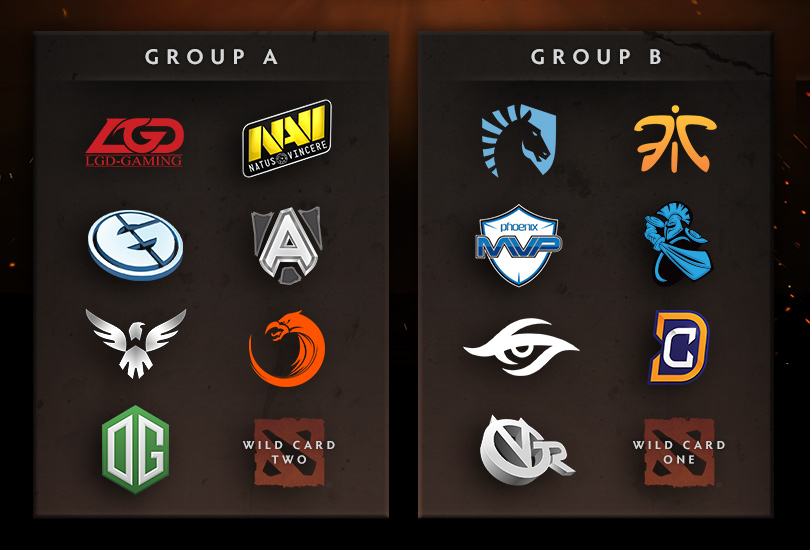 GROUP STAGE ASSIGNMENTS
The International Group Stage assignments are set, and the teams are already hard at work studying up on their first opponents of the tournament. Head over to the event website to check out the initial matchups. Each team will face every other team in their group in a best-of-two. The top four teams of each group will advance to the Upper Bracket of the Main Event, and the bottom four from each will proceed to the Lower Bracket. Visit the Group Stage results to follow along as the series unfold.

WILD CARD ROUND
Before Group Stage play can begin on Wednesday, however, there are two tournament spots still on the line. The Wild Card round will take place on Tuesday, August 2 to further narrow the field to the final 16 teams. The broadcast will begin at 9:00 a.m. tomorrow with Escape taking on compLexity while Execration face off against EHOME. Each of the four Wild Card teams aims to be safely slotted into the Group Stage by end of play on Tuesday, but only two will make the cut. Who will be the first to face elimination? Tune in tomorrow from 9:00 a.m. to find out.

SHORT FILM CONTEST
Today we will also be releasing the top Dota 2 Short Film Content entries into the client for Battle Pass owners to vote on, to be revealed during the tournament’s Main Event. Start watching and help vote to decide which short film auteurs will walk away from The International victors in their own right.